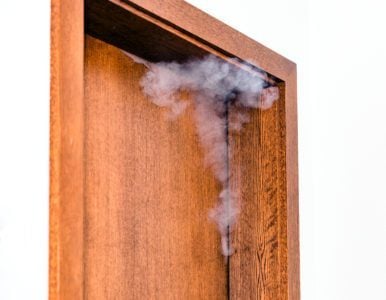 Almost three quarters (72%) of flat tenants would ignore advice to ‘stay put’ if fire broke out in their building and their own flat was unaffected by fire or smoke, according to new research.

Released as part of Fire Door Safety Week, the research also found that 39% of tenants lacked confidence in their building’s ability to stop the spread of smoke and fire.

Present fire safety guidance states that if your flat is not affected by fire or smoke then ‘staying put’ cuts the risk of being overcome by smoke in a corridor as well as keeping access routes clear for firefighters.

This is widely considered sound advice in buildings with a holistic fire protection system and third-party certified, properly installed and maintained fire doors. Unfortunately, the Grenfell fire and subsequent revelations about UK fire safety standards has shown that this guidance is potentially dangerous in thousands of buildings around the country with substandard fire safety measures.

“Tenants are confused about what to do and do not have the confidence to follow advice anyway.” Hannah Mansell, spokesperson, Fire Door Safety Week

Some 28% of tenants polled said they couldn’t understand the rationale behind ‘stay put’ advice and 61% said they would rather take matters into their own hands.

There also appears to be widespread confusion about where responsibility lies for maintaining fire doors. Only 38% correctly identified the landlord or ‘responsible person’, while 16% of tenants believed it’s the fire brigade’s responsibility, 8% the residents’ association and 15% the management company. The remaining 14% admitted to not knowing.

“Seeds of doubt have been sown and tenants no longer feel able to trust the systems in place. They would rather risk their own lives, and the lives of others by trying to get out of a burning building than seek refuge in their flats.”

“This is problematic on a number of levels: by leaving the safety of an unaffected flat and entering the corridor or stairwell, occupants could be overcome by dangerous smoke and toxic fumes that can kill. In addition, numerous occupants all trying to escape at once can create chaos and panic as well as posing a significant obstacle to the fire service as they try to bring the fire under control.

However, for some occupants, such as those with additional mobility or cognitive needs, evacuation may simply not be an option.”

In the last year, only 25% of tenants have been reassured or had discussions with their landlord about fire safety in their building.

“Our research shows that property and building owners are not engaging with their tenants or providing them with the essential fire safety information,” continued Mansell, who is also BWF head of technical research and insight, chair of the Passive Fire Protection Forum and a trustee of the Children’s Burns Trust. “Tenants are confused about what to do, and do not have the confidence to follow advice anyway.

“In addition, occupants must be provided with clear guidance about the fire safety plan and fire safety measures in their building so that they can report any concerns about issues such as damaged or wedged open fire doors and get prepared so that, in the event of a fire, they can take appropriate action.”

Now in its sixth year, the campaign includes seminars, sales promotions, a number of online resources and initiatives and many other activities events taking place around the UK.